Downloads may be featured just like Joomla! articles with an

symbol.  Actually as described later there are several different 'star' images from which you may select. And you can add your own star symbol.

Further you may have different styling in the usual Layouts that just applies to featured Downloads.  An example is shown below where the first download has been featured and the following one is a 'regular' Download.  In this demonstration the 'featured' Downloads use a bright yellow based colouring but in the released version a more muted styling is used to blend better with most templates. 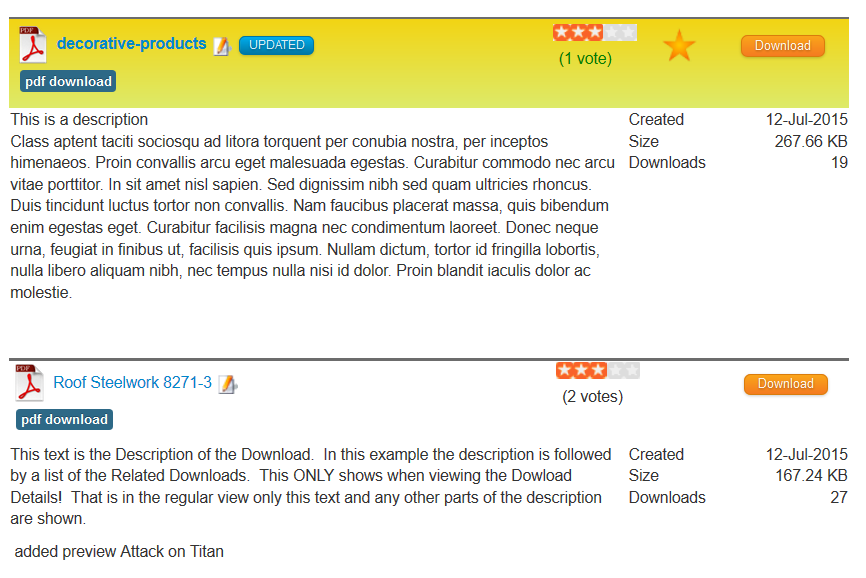 The first question to answer is how to do you make a Download featured.  Again like Joomla! it is done from the backend.  Simply go to the Downloads tab from the jDownloads control panel. This shows a 'Featured' column. Just click on the 'star' icon to change the status.  You can also sort into featured and regular Downloads by clicking on the Featured column heading

The next aspect is to choose your default 'star' symbol.  This is found in Configurarion - Pictures tab at the end of the Icon Settings section, which is just before the CSS Buttons Settings section

Implementing the Featured Downloads requires changes to existing layouts to include additional placeholdes.  There are three extra place holders

To illustrate the changes we will use the "Standard Files Layout without Checkboxes v2.5" layout.  Actually we will use a modified version that has used style= " ... " to add existing style elements as this is compatible with HTML5 where some previously used descriptors are now 'deprecated'. Because various different levels of styling are available this article progressively defines four different layouts. Three of these are useful in regular Downloads listing, and the fourth one is aimed at use with the Content plugin.  Note that all layouts will, over time, be bought up to at least this standard.

The simplist level of denoting that a download is 'featured' is to just add a 'Star' image to the download.  This uses the place holder {featured_pic} in the activated Files layout.  In many respects it is just like the {file_pic) placeholder.