Enabling comments on Downloads with JComments

Comments may be added to a Download by using the free JComments component to give something like that illustrated opposite.

Note: Comments only appear in the Download Details view.

However you can also setup to show the number of comments in each Download by including the placeholder in the active Files layout.

Most of the setup work is in the JComments component.

The number of comments may be shown in the Downloads view as described in the Configure jDownloads section below. 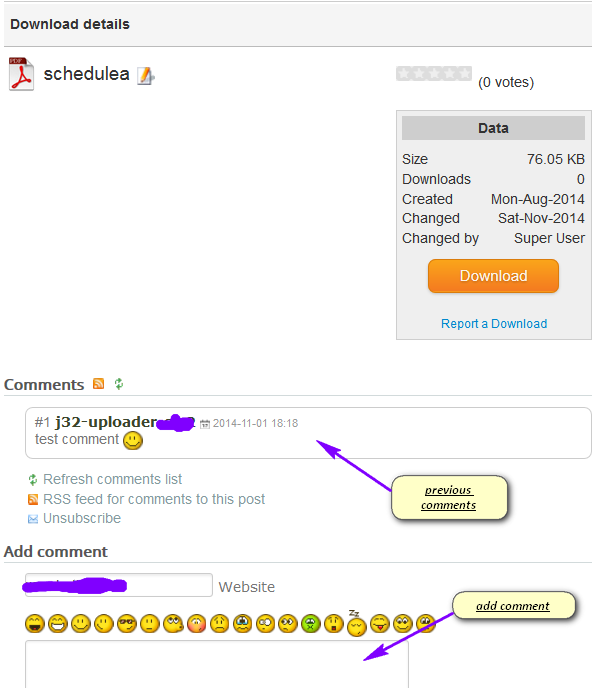 The jDownloads part in setting up to use JComments is straightforward.  First enable option 'Support JComments' in the Frontend tab of

Because comments are only shown in the Download Details view then, as illustrated opposite, it is essential that you also set Frontend options:
1. 'Activate direct downloading' to No;
2. 'View Download Details page' to Yes;
3. 'Use Download title as download link' to Yes;

and finally
4. 'Activate support for all Joomla content plugins' to Yes.

It is assumed that you have been using JComments satisfactorily.  The current version of JComments should be 3.0.7.  If it is an earlier version then first upgrade to 3.0.7 or later.

Also check out the jDownloads settings as above as the location of some settings have been changed.

If you do not replace com_jdownloads.plugin.php then you will get an HTML 404 Page Not Found Error.
The error report might show

somewhere in the report, usually near the bottom.

The next step is to install the jComments Component, which is available at https://www.joomlatune.com/jcomments-downloads.html
Installation is just as usual in Joomla!

The next step is to copy the file com_jdownloads.plugin.php to <yoursite>/components/com_jcomments/plugins using an ftp utility such as File Zilla, your site control panel or a Joomla files manager extension.

Note: there is probably a file with that name already at that location so overwrite it with the present one downloaded from jDownloads.  The one from jD is specific to the jDownloads v3.9 series - there is also one for the jDownloads 3.2 series so be careful which one you select.

The rest of the setup is carried out in the JComments Component.
There are many customising options available in JComments which you may explore depending on how you want the Comments to appear, so consult the JComments documentation as appropriate.  Here just the basic minimum is used.In JComments first go to Settings - General  tab and select All Categories as shown opposite.

The only other aspect that is essential is to choose which user groups will be allowed to add comments.

For this use the JComments  Settings - Permissions tab.

Again there are multiple options available but the critical ones are those in the New Comments section.

You need to set these up for each user group you intend to allow comments.

That's it, all done!

It is of course useful to 'experiment' a little with the jComments settings to get the style you want.  Remember you need to set up each User Group that is to be allowed to add comments. 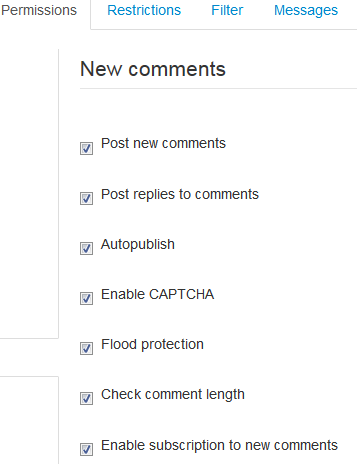 The picture opposite shows two uses of the Content plugin.  One is selecting the layout, which in this  example is just the Download title as a  link.
The other one refers to the actual Download.

Note The default Download layout that the Content plugin uses is specified in Options - Plugin tab or by using  in the article.  In principle it is a different layout to the Activated one in the Downloads section of

.
The picture opposite shows the message as users will see it.

Please note that the Download title was modified to show in red for demo purposes.

As at JComments 3.0.7 the comments were not responsive to screen size.

Additional CSS code may be added to jdownloads_custom.css in jDownloads to make JComments responsive.

The relevant css code is shown below and the results are  like the picture opposite.