When upgrading from the jD3.2 series to the 3.9 series the old style jD Custom fields are automatically converted to Joomla Fields.

Field titles and contents are displayed in the frontend  using placeholders {jdfield_title id} and {jdfield id} where id is the relevant id of the required Field created in jDownloads.

Fields do not have to be in a Field Group, in effect when not in an explicit group they then belong in the 'ungrouped' group!

in the jDownloads Control Panel and then click on

Give the group a suitable Title which in this example is 'Field Group1-ALL'.
Note:The ALL  is my convention here to denote that the default language setting  'All' has been used. Later in this article, in the multilingual section, there are three more Field Groups called 'Field-Group-EN', 'Fied-Group-FR' and 'Field-Group-DE' for Enlish, French and German languages respectively.

In the General tab ensure the Field Group is Published and the Language is set appropriately.  Leave as All unless you have a multilingual site.

Also set the Access as required, which would usually be Public.

Give the group a Description as that will guide users in the Frontend who are able to edit fields.

Also add a comment in the Note as that will appear in the Backend. 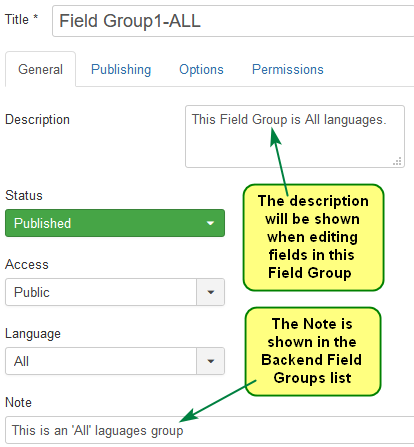 The settings in the Publishing tab are self explanatory.

The only setting that can be changed is the 'Created Date'.

The other options are filled automatically. 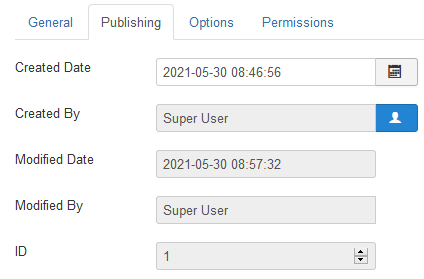 The Options tab has just one setting 'Display When Read-Only'.

This is best left at the default value 'Yes'.  This setting will, by default, be inherited by any Field that is a member of the Field Group.

The default permission for front end users is

so if you want Frontend users in a specific user-group to be able to manage Fields then you need to setup the permissions appropriately.

One of the significant features of Field Groups is that these permissions will then be inherited by all the Fields that belong to the Field Group. 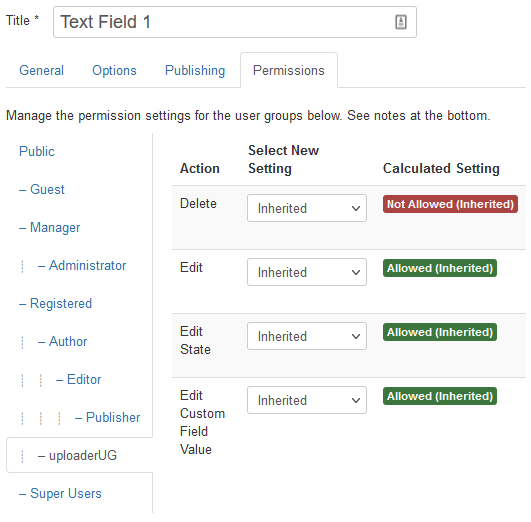 The next step is to create the relevant Fields.  In this example there are three Fields, a simple 'Text' field, a 'Colour' field and a 'Radio' field.

which will open the Fields create/edit form.  Here we initially show details of creating a Text  type as that covers most required fields.  Field types like Text and Colour only have one Text and one Value to enter.  Later we also show creating a Radio field as it has multiple text/value possibilities.

On the General tab, as shown opposite, give a suitable title. In this article we have used 'Text Field 1'.  Note that this will also automatically fill the 'Label' option.

When the Field is Saved then the Name option, which is like the 'alias', will be generated from the title.

The Type pulldown sets the type of the Field from the pulldown list of those available. Once saved it cannot be changed.

It is strongly suggested that you leave the Default Value option empty. 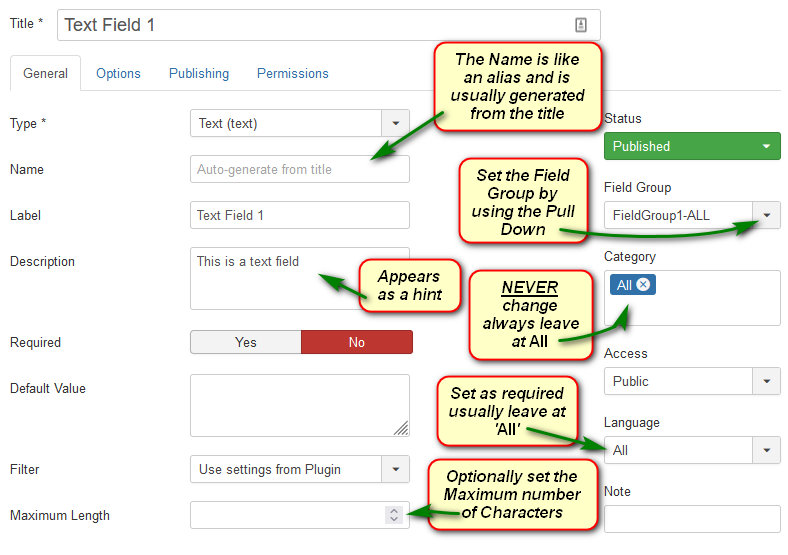 When there is no Default Value then the Field will not be shown until it is editted and given a value in the relevant Download.

If you do specify a Default Value then this value will appear in all Downloads that have not had an explicit value entered.

Ensure you set the Field Group by using the pull down.

Important!! Always leave the Category as All as Joomla! only supports its own article categories!

The Options tab basically deals with how the Field text and value are to be shown in the Front End, but note the Automatic Display setting.

The items in the 'Form Options' section allow styling how the text and value will appear also in the Edit Form.

The settings in the 'Render Options' section mainly style the look of the Text and Value as they are to appear in the frontend view.

However the Automatic Display setting controls where the text and value will appear in the Front End.  This is discussed in more detail later.

As a starting point it is strongly suggested the 'Automatic Display' option is set to 'Do not Automatically Display'.

And then do a 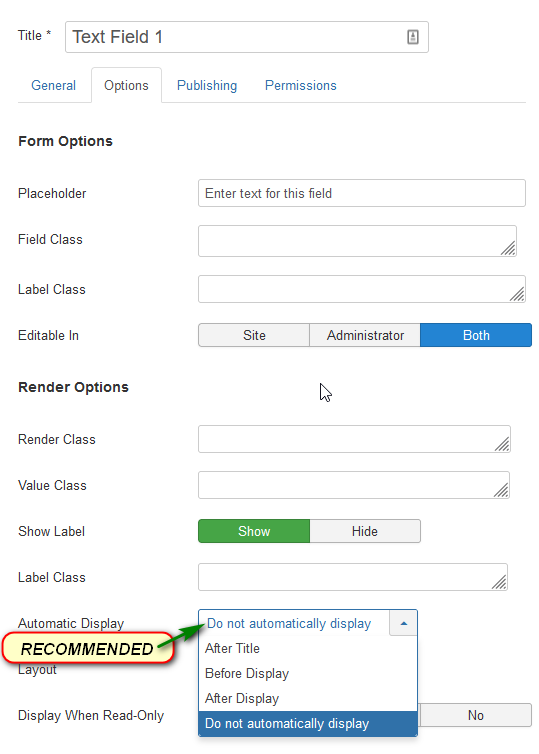 The Publishing Tab allows setting or changing the created Date.

The Created By, Modified Date and Modified By entries  are auto filled. 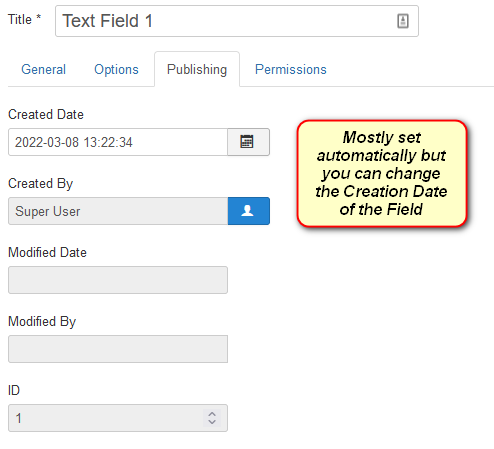 The default setting for permissions is that they are inherited from the Permissions set in the Field Group.  But they do need to be set separately if the Field is not in a Field Group.  If the Fields have been 'imported' from the 'custom fields'  of jD 3.2 site then you will need to set the permisions on every field type separately.

Setting up the Options, Publishing and Permissions tabs is similar in all Field types.
To add the Radio Text and Values click on the

button for each radio button you wish to have.  Enter in the  Text  column the 'question' that the user will see, and in the Value column specify the vaue, which is actually text, that will be returned to the code when the button is selected in the front end.

Field types like Text and Colour only have one Text and one Value to enter.

Setting up Fields and Field Groups in a multilingual site is just the same except one selects the Language appropriately.

In this example as well as the All group, three language Field Groups were created: English, French And German as illustrated opposite.

In a multilingual site only those of the same language as currently in use and the All languge items are shown in the frontend.

Thus when editing or creating a Download there will be 'tabs' for the 'All' group and the relevant language.  If there are 'ungrouped' fields then they will also have a tab.  In practice a true multilingual site would not have the 'All' set; and in a non multilingual site there would normally only the 'All' setting would be used as the language selector.

Diferent views occur for non-multilingual sites, where all content has ALL for the Download Language, and Multilingual sites which use language specifiers such as {de-DE}.

As illustrated below if the language field is set for ALL then when editting the 'language' Field Groups as well as the ALL Field Group are shown.  This is to enable consistency across languages for the 'answer'.

But of course when showing in a non multi language site only the Field Groups set to ALL are shown.

Example views of the tabs that are present when editing/creating a Download in the frontend for a mixed multilingual and 'All' site are shown below.  In a 'pure' multilingual site there would be no ALL Field Group.

In the first two examples there are tabs for the current language and for All.

For a 'pure' multilingual site there would be no 'All' tab.

The first one is where the Download was set to English.

The second one is where the Download was set to the German language.

The third example is slightly different as it has an All tab together with English, French and German Fields tabs.

Each tab in the edit form for the four Field Groups is shown opposite.

In this example the 'All' and the 'English' version happen to be identical.  Actually the 'French' and 'German' are also logically identical to the others.  This was not done by Joomla! or jDownloads but by the author for consistency.

One is free to set completely different 'questions' and response values.

Whilst the response values would be different in different Downloads, it is clearly good practice to make the 'question' text logically identical across languages.

Showing jDownloads fields in the front end is only available in a Download or Download Details layout information block;

The Downloads use the place holders {jdfield_title id} and {jdfield id} where id is the relevant id of the required field.
In this example the Fields are shown as part of the Information section of the Compact layout.

The image opposite is the view shown in the frontend view.

The second image is the modified code in the Compact Layout.

The parts referring to fields have been highlighted 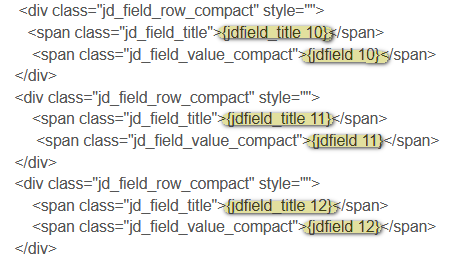 The situation with Fields in multilingual sites is similar but to work properly you need to use the jDownloads multilingual placeholders like {en-Gb}, {de-DE} and so on to select the appropriate one.

The image opposite shows part of a Compact Layout that has been modified to support two Fields in mutiple languages.

The whole of the en-GB section and part of the de-DE section is shown.

With this method there are no 'blank spaces' shown in the front-end for the other languages. 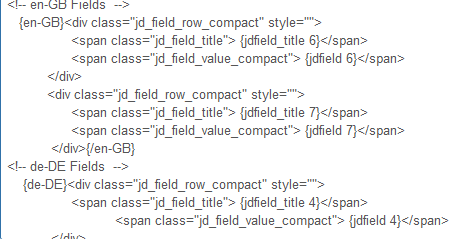