There are a large number of Options in the Pictures and Buttons tab.  Many of these are very similar so in this article not all idividulal options are noted.

Options have been put into appropriate  main sections and subsections as indicated in the index opposite.

There is only one option for icon symbols, 'Info Symbol Size' with a default value of 20 pixels.

The image opposite shows some of the symbols that are available.


In the front end a typical view could be as shown opposite.

Note that mini-images are only shown if there is information in the relevant field.

A hint is shown if you hover the mouse over a symbol.

It is of course necessary that the active Downloads layout supports showing the mini-images.

Presently the only one is  'Standard Files Layout'.

To add mini-image support the layout needs to have a code such as shown opposite.

The Option 'Default Symbol for Categories' has a pulldown to allow selection of which image symbol will be shown in the frontend if one has not been set explicitly  when creating or editing a category.

The othe two options set the height and width.

If the sizes are changed then the symbol category shown above will also change to the sizes that will be shown in the frontend.

This also applies to the other symbol images who will change to their specified size (file, featured and 'no-image' symbols).

If you select No for the 'Use File Type Symbols' option then the other four options are not shown.

As shown below there are 3 sets of Icon symbols that may be selected the default set.

As an example the pdf symbols for each set are:
'original':

The pull down with option 'Replacement File Type Symbol for Downloads' has a very long list of file types that one may select as the default. 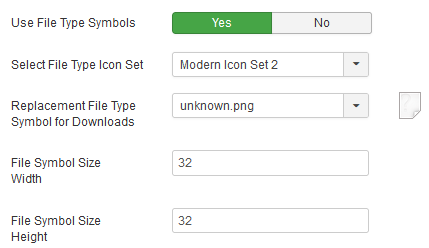 The image selected is only used if jDownloads does not recognise the file type of the downloadable file.

That is jDownloads will use best endeavour to automatically show the appropriate image that corresponds to the file type.

When creating of editing a Download in the frontend then it may be marked as featured by setting option 'Featured' in the Publishing tab to Yes. In the backend there are three methods, the simplest is by clicking on the star symbol

More details of this any other aspects of 'featuring' a Download are given in a separate article Featured Downloads. (opens in a new window/tab)

The symbol that denotes a featured Download is by using the pulldown in the 'Select 'Featured' Symbol' option which has a choice of Stars in many different colours.

You can also use your own symbols by uploading them as png files with either FTP or the web site control panel into directory /images/jdownloads/featuredimages. 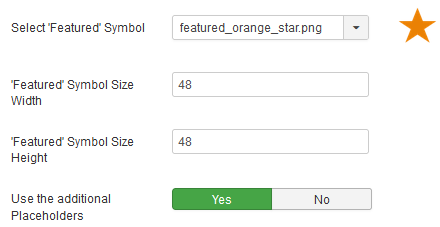 As noted above more information is give in the Featured Downloads article (opens in a new window/tab).

In the jDownloads 3.9 series and higher the Buttons are all created from specific CSS items in file jdownloads_buttons.css

One uses the pulldown in the  'Select Menu Button Colour' option to choose one of the avilable colours.

The size is selected using the pulldown list in the 'Select Menu Button Size' option.

However note that option 'Select DOWNLOAD Button Size' option allows setting a different size when listing Downloads in the Frontend.

Both MIRROR buttons are the same size as specified in option 'Select MIRROR Button Size'.

The option 'Use 'Icomoon' Font Symbols default is No.

When set to Yes it adds appropriate sybols as shown in the 'before' and 'after' images shown opposite.

These three options select which colour is used for the  Hot, New and Updated buttons respectively.

Note that the size of the buttons is not selectable.

These options are the trigger points of how long or when to show the symbol.

The option  'Set how many days a Download is shown as NEW' means that the New symbol will be shown for the specified number of days after the creation date.

Option 'At what point is a Download maked as HOT' is a little different.  For example when set to 50 it means that the Hot symbol is shown when there have been 50 or more downloads.

The option  'How long is a Download UPDATED' relies on two criteria.

jDownloads records the date and time on each occaision that the Download is edited.  This might be a minor change to say the description or similar that is not always an update of the content.

As the software does not intrinsically know that the edit is a real update then the frontend edit code also has an 'has it been updated' field in the Publishing tab and a similar setting in the backend General tab .

So the Updated symbol will be shown for the specified number of days after the last time that the Download was 'edited' and the 'has it been updated' field  is set to Yes.

When a picture is uploaded as part of a Download then this set of options allows it to be made into a thumbnail.

As part of the Download one or more images may be added to the Download to give a better idea of the content of the downloadable file.

As an example the Download might have a downloadable pdf file that is all about green woodpeckers.  Clearly adding an image of a green woodpecker would better illustrate the subject matter.

Clicking on the image gives a larger scale view as illustrated on the far right. 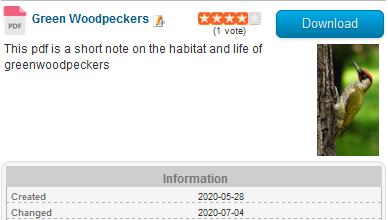 To achieve this jDownloads uses the GD Library, which is normally part of the services provided by the majority of web site hosting.

If the GD library is present then jDownloads shows a message

. If it is not available then a message with a red backgroud is shown.

jDownloads makes the thumbnails to the specified size when the Download is created or an image is added during editing.  This avoids the delay when viewing with 'on demand' scaling.
The first option, 'Create Thumbnails from uploaded Pics' has to be set to Yes to create the thumbnails.

Note also if the downloadable file is itself an image file then when the Download is created, a thumbnail will also be created.

When option 'Use this also for Auto Monitoring' is Yes  then any images files found during the automonitoring will also have thumbnails created.

The next four options set the size, in pixels, of the thumbnails and the main image itself when displayed in the front end.

Note that the aspect ratio of the image is preserved as the sizes are the maximum, that is the largest dimension of the image will set the scaling.

to Yes and clicking on Save or Save & Close will recreate the thumbnails at the required size. 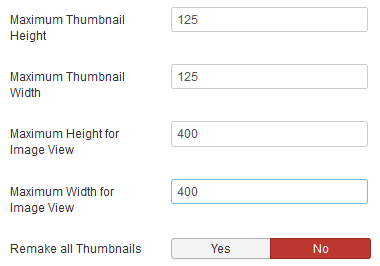 It will also give the number of Thumbnails that have been recreated in jD 3.9.2 and later.

NOTE If both the GD Library and Imag- Magic are missing, that is if both

are showing then jDownloads will report an error when tryin to re-create the thumbnails.

In some rare situations the thumbnail resizing fails to complete.  This is generally due to a mismatch between the php.ini settings where the memory_limit is smaller than the post_max_size or the upload_max_filesize settings.

The memory_limit setting should be larger than the largest of either post_max_size or upload_max_filesize.

If the downloadable file is a pdf file then the Imagick module will make a thumbnail of of the first page of the pdf if the option 'Create Thumbnails form PDF Files' is set to Yes.

The default setting is No.


Most of the other options are just like those as described in the Image Thumbnail settings except 'Image Type' which allows choice of the type of thumbnail and there is no 'Remake' option.

The resultant image is usually good if it is from say a front cover but is generally less satisfactory if the first page is detailed. 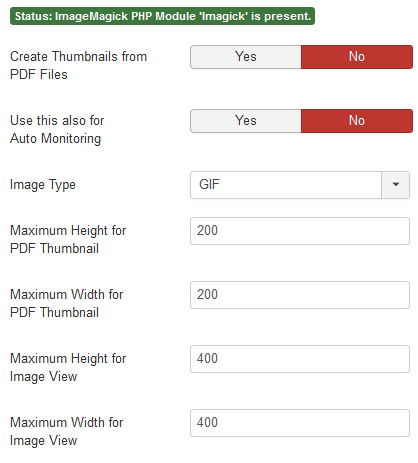 When set to Yes then any images associated with the Download will be shown provided that the active Layout includes showing screenshots.

Layouts that show screenshots include code such as illustrated opposite.

If there are no images and the above conditions are met  then the 'No-Image' image as illustrated opposite is shown in the frontend view.

The 'frame' of the 'No-image' image is transparent so if you have a coloured background then the image appears as: